So, since Ewa Michalak announced today that they would no longer be making below a 65 band (no idea if this is temporary or not, obviously I’m hoping temporary!), I’ve seen a lot of questions going around about Comexim, wondering if they could take Ewa’s place for custom band sizes.

I haven’t personally tried ordering anything custom from them, but I’ve read of them creating a higher center gore, lowering cup height (I might do that one next time I order from them!), and even making 26 bands. I haven’t seen the direct evidence for any of these customizations other than the higher gore, but to me it seems that it’s worth asking.

So, if you’re interested in Comexim, how do you determine what size to buy in them, and how do you order?

The way that I determined my size in Comexim was by taking my UK size, 28JJ, and realizing that a JJ cup is the 14th cup. Then I counted 14 cups down on Comexim’s chart, and (keeping my usual band size) came to the conclusion that I would need a 60N.

And then I ignored this conclusion and bought a 65L because I really wanted the Carmen and it didn’t come in a 60N. But after trying it, I know that 60N would definitely be my correct size in Comexim!

Ordering was pretty easy for me, though I have heard stories of other women who have a hard time getting their emails answered. I initially emailed them asking if they could ship to the US, because I wasn’t able to check out through the website due to my address. They said yes, but that I’d have to order through email, and then would pay through Paypal. I told them what I would like, and they sent a Paypal invoice. My only complaint with the ordering process is that after I paid, it took two weeks for my items just to leave the warehouse. I’m not sure why, or if this is the standard for them, but I had already received the Urkye order that I made on the same day before the Comexim order even shipped.

Comexim doesn’t have an English speaking customer service person, as far as I’m aware, so use simple language that Google translate will be able to work out for you! Keep things short and sweet for simplicity’s sake. However, even with the language barrier, I have never received any emails that came across as harsh or rude from them.

How does Comexim compare to Ewa Michalak?

I would say the bands fit similarly true to size, with the occasional variance that you find in all brands. The wires are about half an inch narrower than Ewa Michalak’s CH style, and a quarter inch narrower than my PL. That doesn’t sound like a lot, but it can really make a huge difference once the bra is on (as seen in my post about “Strapgate”). The straps are set much narrower than either Ewa Michalak bra, which I greatly appreciated when first trying them on. 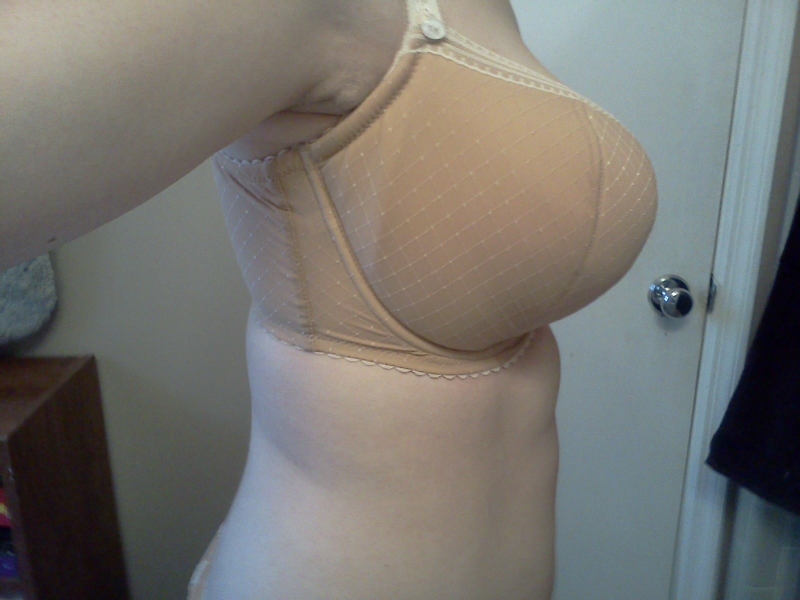 Side by side comparison, showing difference in wire width and cup height under the arm. 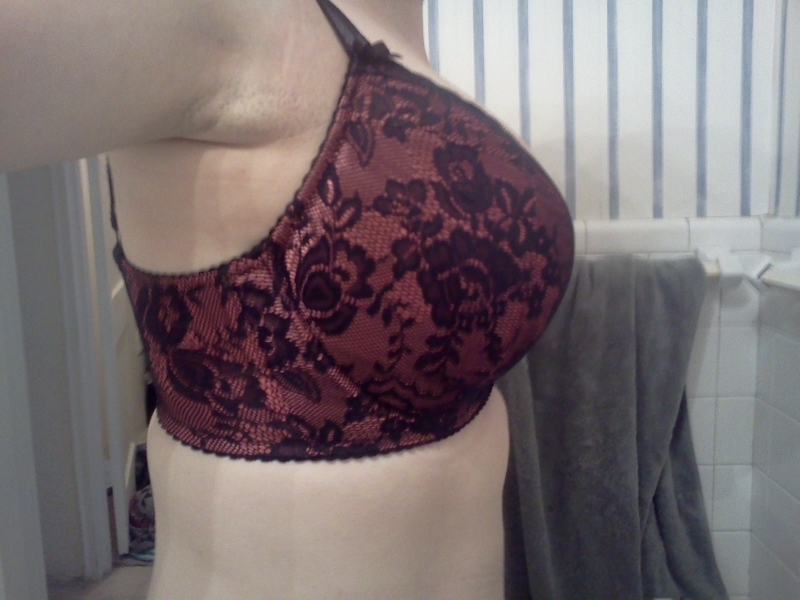 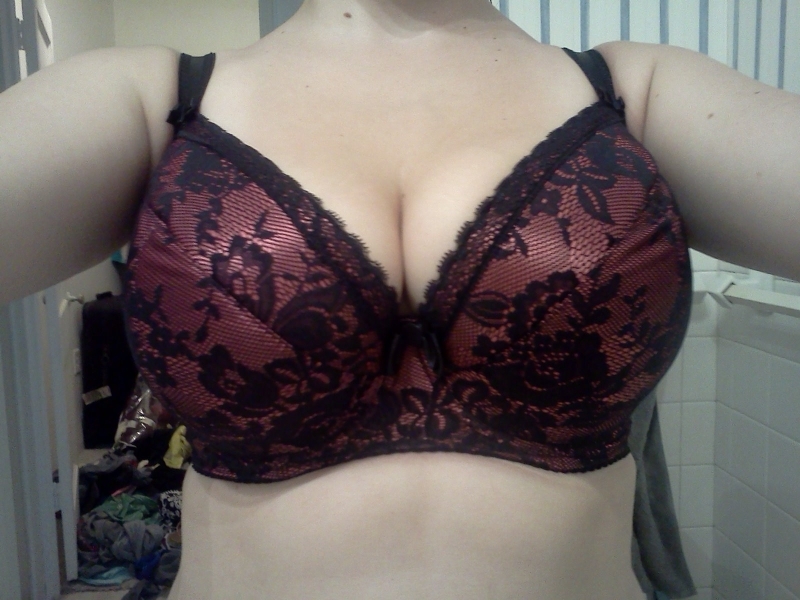 Comparison of straps from the front. 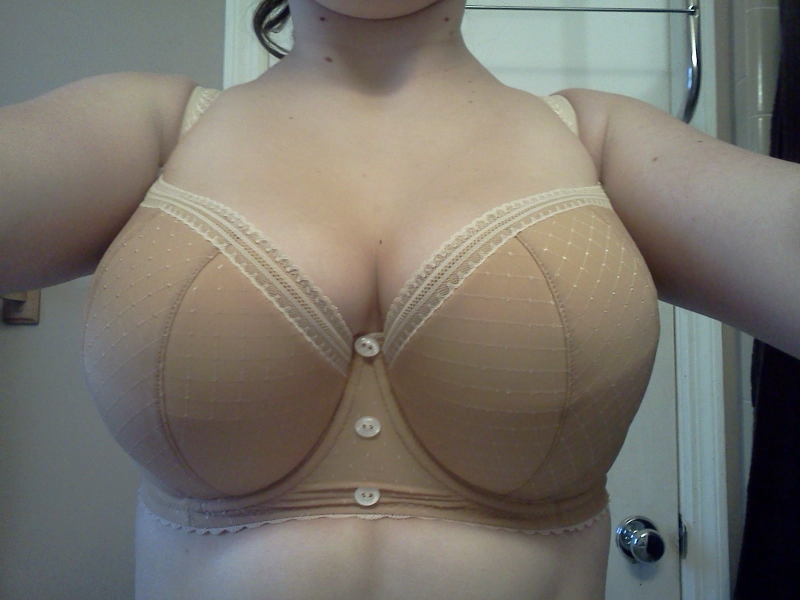 The shape Comexim gives me is not quite as round as Ewa Michalak, but still very nice and I actually probably prefer it to the perfectly round look. The projection is similar to the PL from Ewa Michalak, but is definitely less than the CH (as illustrated in the picture below). When looking at the picture, remember that the PL is two whole cup sizes larger than my Comexim bra, and the CH is one cup size bigger, so that will definitely have in affect on the perceived projection. If the bras were in the same size, I would venture to say that Comexim might have more projection than the PL, but since they are not quite the same, it’s impossible to say for sure. 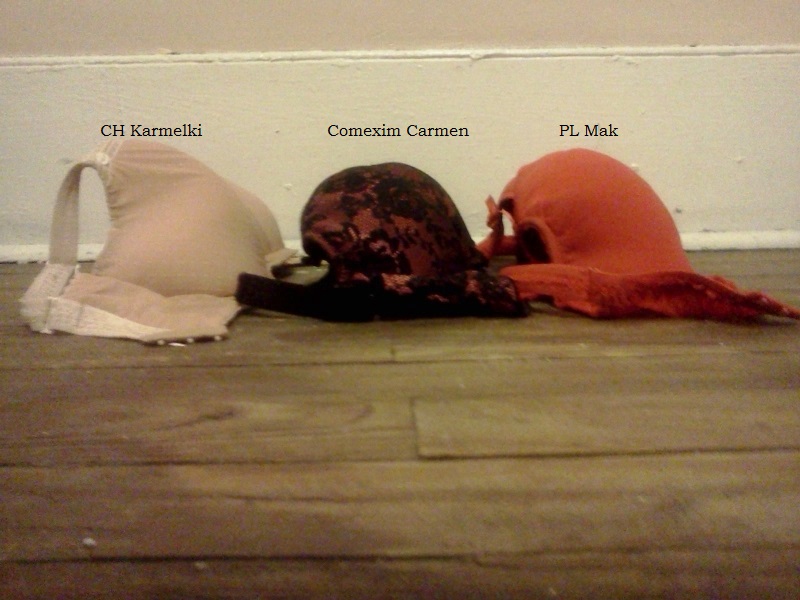 Sorry for the blurry picture – hastily taken by my phone camera!

As of right now, Comexim does offer fewer shape variations than Ewa Michalak, but for those in need of 26 bands, they might be the new only option. And with theoretical customizations such as increased center gore height and lowered cup height, hopefully everyone can find a Comexim that works for them. And who knows, in the future, as their business grows, we may see more than just padded plunges coming from Comexim as well. Until then, as long as their padded plunges look like this, I’m not complaining! 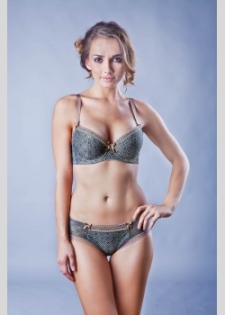 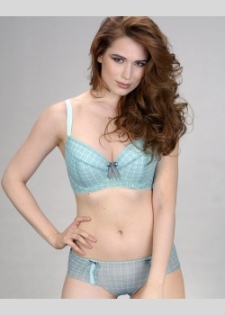 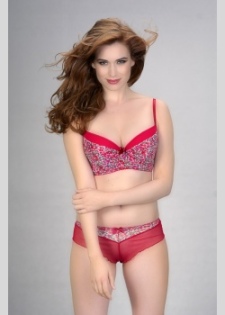 So, here’s the thing. After being told that my bras fit dreadfully by Ewa Michalak (it’s on their facebook page, I wasn’t able to figure out how to link directly to the discussion!), I’ve been seriously freaking out about it. Do my bras actually fit horribly because the wires are in my armpits? Well, here are some of the things I’ve been thinking about it.

1. If my ribcage measures 28″, and the width of the two cups combined is ~14″ (as in my CH Karmelki), the of course the wires are going to wrap around my ribcage.

2. I don’t know if I’m just like wearing bras wrong or something, because apparently some people can wear looser bands, but a 30 literally rides up my back and needs to be adjusted all day. I know some bands sit more slanted than others, but if a band CONSTANTLY moves and needs adjustment… I cannot wear that band.

3. Cups are not graded down with band size. You cannot take the cups from a 36GG and stick them on a 28JJ and then assume that the wires will not wrap around the 28″ girl’s ribcage. That’s just not logical.

4. I’m further cemented in believing that I’m not wearing the wrong size by the fact that other bras in this size do not have this wide-wire problem. My Comexim bra is a 65L, equivalent to 30HH. In it, I would need a 60N, or 28JJ. The band, however, stretches the same amount as my PL Mak, and less than the CH Karmelki. The wires on this are not too wide. Polish girls on Balkonetka (who Ewa says are wearing her bras correctly) are also wearing the same size in Ewa Michalak and Comexim. The difference in fit between my Comexim Carmen and my Ewa Michalak bras is a matter of style of the bra, not a matter of me wearing the wrong size. 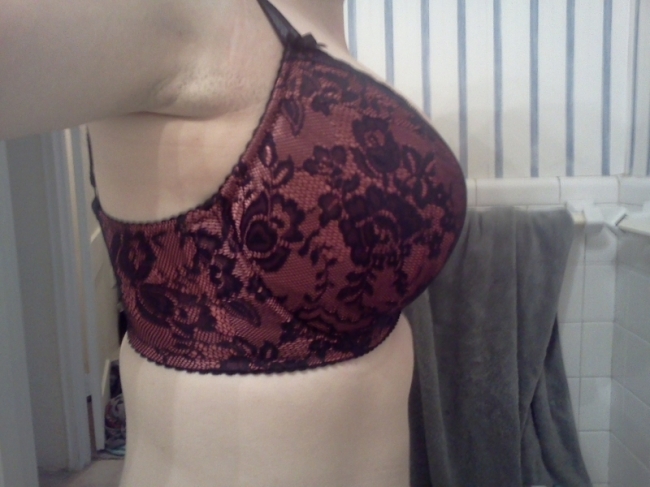 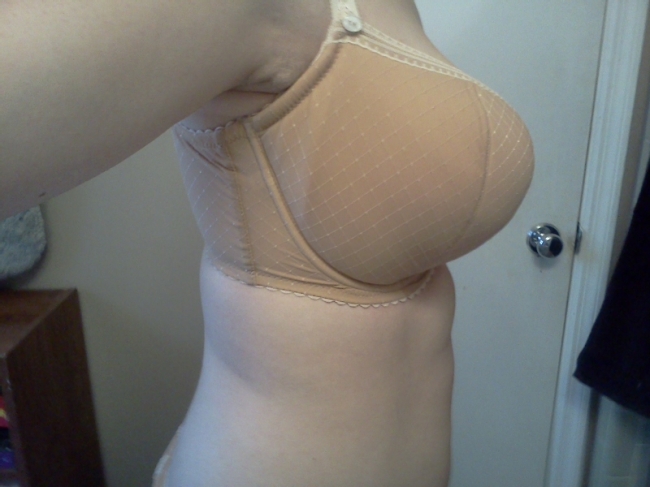 5. I’m literally wearing one band size smaller than the calculator suggested me, in a model that has a stretchy band. They said that my cups had to be smaller. Even before alterations I spilled over the top of the bra even with the straps loosened. It’s just another bra that is too shallow and too wide for my breast shape, but in my size you work with what is available to you (since not much is available at all).

I’ve been reading a Polish forum for the last couple of days because I noticed my blog was getting hits from it, and in it they basically talk about how +0 is crazy and how can we not notice that we’re wearing too tight bands and how can we breathe and a whole bunch of other stuff. Apparently, Poland went through a tight band/+0 “phase” and is now back to +2/+4. They agree with Ewa Michalak that our bands are too tight, and it really makes me wonder how they expect my bra to stay on when this 60 band already moves around all day? Also I wonder how they think we could be wearing bands that were uncomfortable for us. Maybe some women do, but I would sacrifice boob security for comfort any day! Also, if I were going to be wearing the wrong size, why the hell would I choose such a hard size to find?!

I feel like these women who are saying that we (or me specifically, in this instance) are wearing the wrong bra size are not taking something into consideration: I got to this size through trial and error. I didn’t follow some calculator, or anything, I just followed my instincts until I found what was comfortable.

I was in an uncomfortable 34DD, and got fitted to a 30FF. During this time I often would wear 32DDD’s because they were easier to find, but this band size rode up and caused my neck and shoulders to ache. As I lost a little weight and my breasts grew, I found that a 30 band was now allowing my shoulders and back to ache, so I went down to a 28 band, and sized up in the cups until I was no longer pillowing out of the top. Did this result in too wide wires in almost all bras? Yes. Would I rather have too wide wires and wire distortion than a too loose band or cups that I’m falling out of the top of? Yes.

So if there are any +2/+4 followers out there who are wondering if I’ve tried wearing a looser band and smaller cups, the answer is yes, and it was painful, which is why I wear the size I wear now.

That’s all I’m going to say for now, just because it’s really late and I should go to sleep, but I have all this ranting in my mind that I needed to get out, and it’s been a while since I’d posted anything 🙂 More posts in the future inspired by “Strapgate” will be coming, including one where I try the size that theoretically should make things work for me – a 65H.