Hi guys!! Sorry it’s been so long since my last post- over a month, if you can believe it! Since school started I have just been INSANELY busy, since I’m taking quite a few hard classes (Physics 2, Fluid Mechanics, Thermodynamics… I’m looking at you!). School and sleeping and the rare night out are really keeping me from updating regularly, but I’m going to try to get better about it since I just went through a “test cycle” (that’s what I call when all of my professors have tests in the same 2 week period) and will probably be a bit freer than I have been so far this semester.

Now that I’ve made excuses for myself, on to the review!!

Unfortunately, this review is not going to be as good as the review for my PL Mak. Something about this bra just doesn’t fit quite right with my shape, and I think I’ll be sticking the PL cut from Ewa Michalak in the future.

As you can see, for a “plain” beige bra, it is really quite pretty! It has a line of 3 buttons down the center gore, lighter tan lace lining the top of the cups, and a criss-cross shimmery embroidery pattern. The only one of these details that interferes with the nude-under-shirts function (nude for me, that is!) is the lighter colored lace at the top of the cups. It’s lighter than my skin, and can be seen under my most see through top, but is generally fine still.

Not a super accurate portrayal of color, but a detailed shot of the criss-cross embroidery!

Ok, now that we’ve discussed how gorgeous it is, it’s time to get down to the bad parts 😦 I bought this bra in a 28JJ, which is what I currently would guess is my size in most UK brands (though I’m not sure because I don’t own any that fit!). Right after I put it on and arrange myself into the cups, I fill it perfectly. 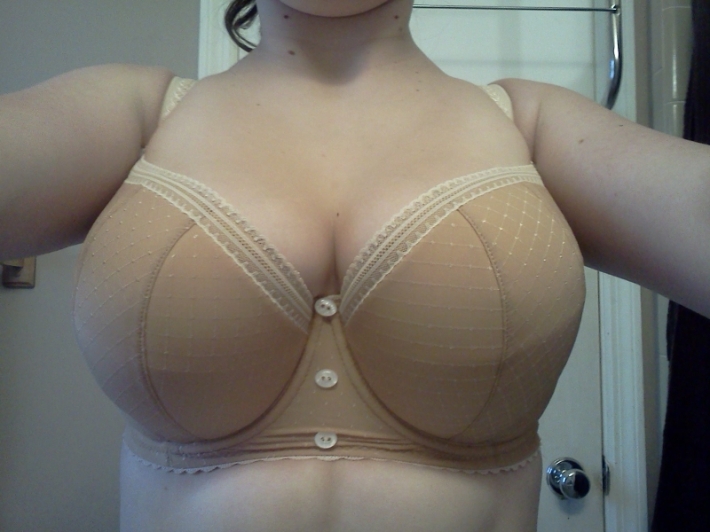 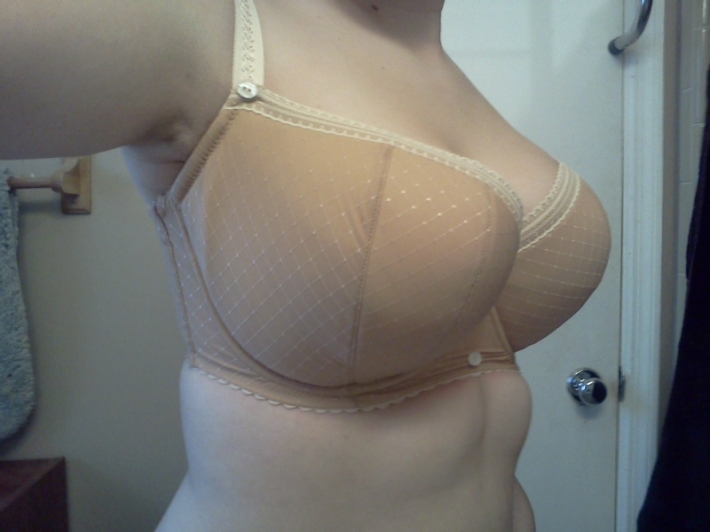 As you can see, initially this bra, while not perfect, fits decently well! The straps are too far apart, and the wires are a little high/wide, but the same things could be said about the PL Mak (except the wire width, the width of the wires on the Mak is perfect) and I love the Mak! The problem comes after I wear this bra for more than a few minutes, especially if I’ve been sitting down. Here is what this bra looks like right now, after wearing it just while typing this post:

So much gaping!!!! My boobs just fall right out of the wires into the band! Usually when this happens to me, it is because the band is too loose. And this band is definitely stretchier than the band of the PL Mak. I could fasten it on the tightest hook comfortably right when I took it out of the box, but I remembered reading that Ewa’s bands were constructed to be supportive without being overly tight, so I tried to keep it on the loosest hooks anyway, in order to get the most life out of the bra. But not long after I had it on I realized that it was riding up, my boobs were falling into my armpits, and it was just generally being annoying, and that I did indeed need to fasten it tighter. However,  this still did not fix my boob-falling problem!

After thinking about it, I decided that the problem is that the bra is just too wide for me in almost every way. The straps sit IN my armpits and I have to angle them diagonally so that they sit on my shoulders well. Not exactly the best thing for support. I’m thinking of attempting to alter the bra to bring the straps closer together, because when I’ve pulled the cups from closer to the middle the seem to support me better. Until then, I’ve kept it because 1. it’s not returnable, and 2. I don’t have any my-nude bras aside from this one, so even though my boobs fall out of it after a while, it isn’t noticeable under shirts and I still need something to wear under my lighter colored clothing.

Basically, in the future, I think I’ll be sticking with PLs. Plunges generally work better for my close-together shape anyway, and I am kind of a cleavage addict, so usually half cups won’t give me everything I’m looking for in a bra. If I ever get around to altering this bra, I’ll make sure to post about it!