So, over the summer while I was in bra-buying heaven, I decided I wanted a sleep bra. I didn’t really need one, but I would occasionally wake up with sore shoulders, or a boob in my armpit, and I thought maybe a sleep bra would be a good investment. Luckily, at the same time, the Sophie Support bra also cropped up on eBay for only around $25, so I snatched it up!

Unfortunately the closest thing they had to my size was a 30J, but since I was just getting it as a sleep bra, I wasn’t too worried about it not being a quite-right fit!

The bra is wireless, made of a solid pink fabric with a white mesh/lace overlay. It’s very pretty, and fastens with 3 hooks in the back. It’s extremely comfortable, but overall isn’t a good fit. The center gore doesn’t lay flat, though due to the wireless design I’m not sure it would on anyone. I have to fasten it on the tightest of many rows of hooks (I don’t have the bra with me, as I’m at my parent’s on winter break, but I think it was 5 rows?), and the edges of the cups wrap around almost all the way to my back. The front of the cups are a good fit, but there is obviously a lot of empty fabric on the sides. 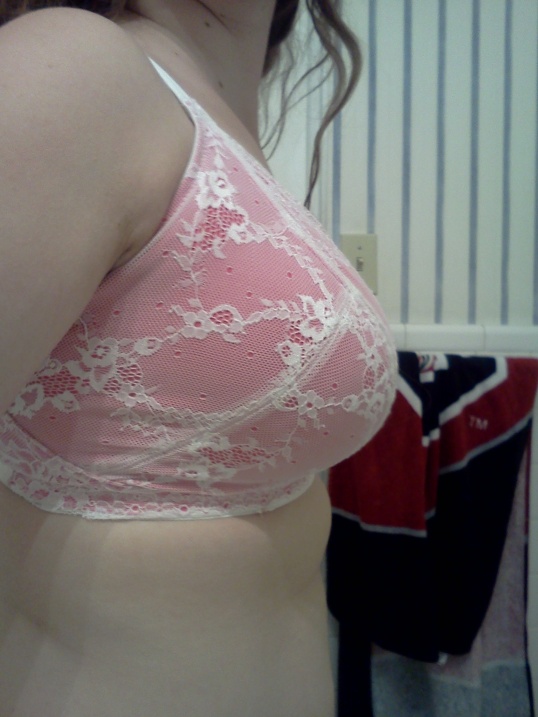 The shape from the side definitely leaves something to be desired! It’s basically just my natural shape, which is alright, and I still wear this bra out of the house sometimes, but it’s not my preferred shape – emphasized and round!

Overall, I don’t have a lot to say about Sophie. She’s definitely beautiful, and if I were someone who hated underwired bras, I’d probably be happy with her. She does a great job of what I bought her for – to keep my bosoms from catching on things in my sleep – but she’s not really supportive enough to enter the daily bra rotation. I would say that Sophie is to me what those cheap Target sports bras are to girls with smaller chests – a bra for days where I’m too lazy to put on a real bra.