Halloween is coming up soon, and for me the celebrations will be beginning less than a week from now, so you can imagine how stressed I was that (until yesterday) I didn’t have a costume!

I’d been looking around online for costumes for a long time, but when you are curvy, it’s just impossible to know which costumes will be… too much, if you will, in person. And then, when you find one that looks like it would be appropriate for the general public, how can you tell what size to order? Should you order the small/medium to fit the waist? Or the large/extra large for the boobs and butt? Unfortunately, these dilemmas led me to a much more expensive Halloween store to try on a million and one costumes. Here are the main problems I ran into:

1. Skirts that are just too short

I know, these are “sexy” costumes I’m trying on, of course they’re going to be revealing, etc. etc. But when you’ve got some junk in the trunk, things that would be skanky-cute on another girl on Halloween becomes skanky-stripper on you. 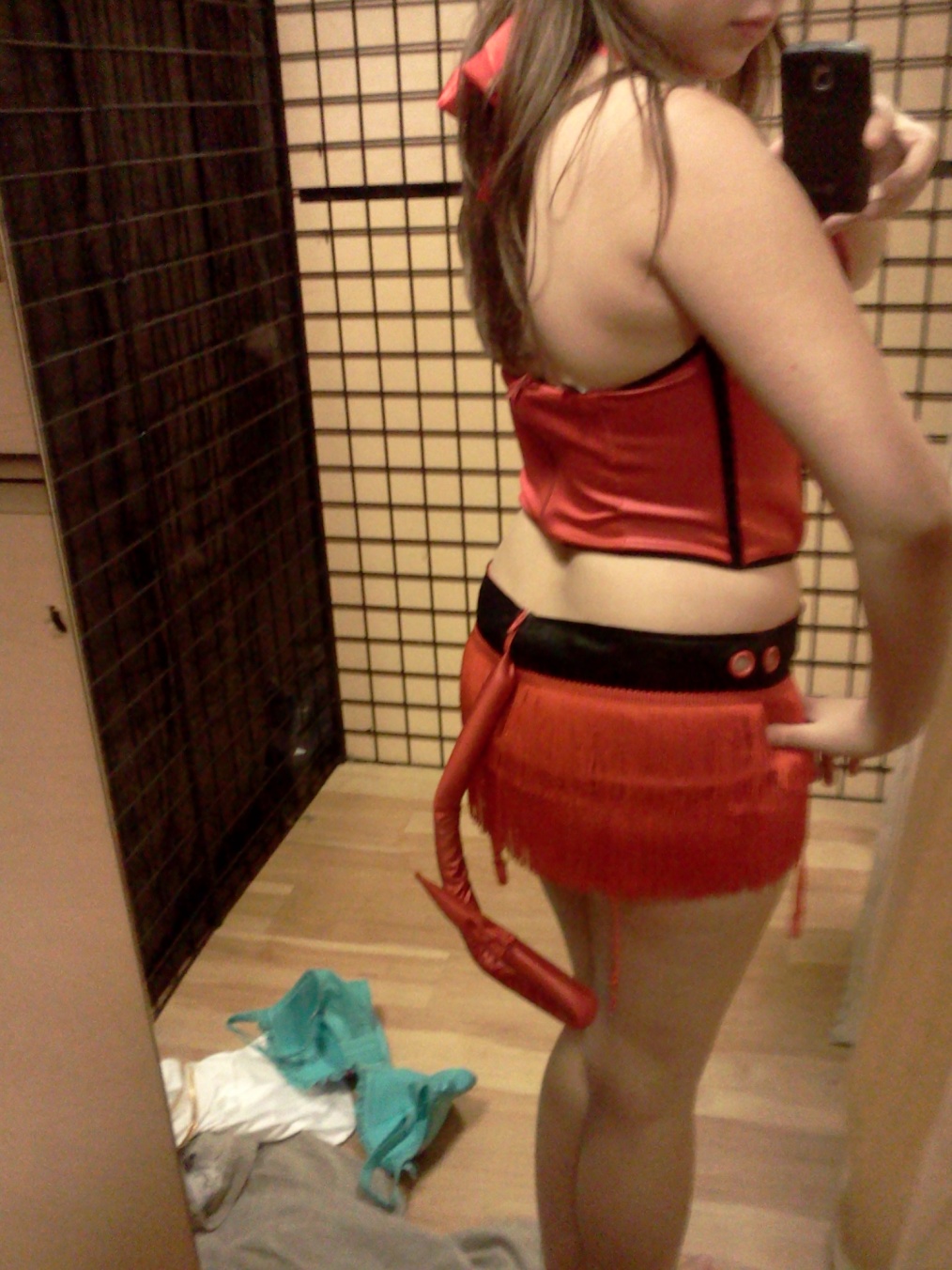 You can’t tell that much from the angle, but my butt is literally 1 finger width away from greeting the world. This is an otherwise cute costume that a curvy girl just can’t wear in public 😦

This is probably my MOST RUN INTO PROBLEM and it really limits what I can wear on Halloween. So many costumes are adorable, but just are not practical when you have breasts that need supporting, such as these:

And I don’t have a strapless bra (very few options for a 28J), so pretty much anything strapless is out. The only costume I found that I could go bra-free in was the same devil costume whose skirt is pictured above.

The key to this costume is that the top is a “corset” (aka cheap plastic boning is in the bodice). It does an alright job of keeping the girls up, but I can’t help but think about how worried I’d be all night about keeping them in place, and the weight that my neck would be forced to carry from the tie halter top. The even worse part of this top though, is a problem that deserves a section of this post all to itself…

Curvy women everywhere know how hard it is to find something that fits in both the boobs/butt and the waist too. This is hard enough in regular clothes, but somehow in costumes this problem is even more exaggerated. It’s hard to tell in the picture above, but the corset for that devil costume is about 2″-3″ too large everywhere below my boobs. It’s not even sitting on the skin. And yet my boobs are threatening to make a break for it. Here’s another great example of this problem:

Here the waist fits well enough, just slightly large, but as you can see, that button is getting read to pull right off. Very frustrating.

Maybe this is just me… but I think my curvy figure looks kind of awful in drop waist clothing. This isn’t something I usually have to deal with, but SO MANY costumes are drop waisted!.

I just find the drop waist increases the chances of the waist not being fitted enough, and since usually the “waist” hits right at my hips, it emphasizes the widest part of me. I like when my hips are emphasized… but only if my small waist is being emphasized too!

So those are the main problems that I ran into Halloween shopping… Have you had any similar issues? Am I wrong about drop waists?

5 thoughts on “Halloween With Curves”